If you missed the last post that introduced my friends to Sirocco the world famous Kakapo, here is the video again that brought him such renown and infamy – and a two year rehabilitation programme that involved a large stuffed owl and produced a more socially adept kakapo ambassador…..

The evening after Winter returned to the southern hemisphere, hurling rain, wind and bone chilling temperatures at us as a reminder that he wasn’t quite done with us yet we, Danella and I, donned our jackets, boots and scarves and headed off to meet our Kakapo Ambassador.  I’d like you to know straight off that Spring hurried to our aid that day and returned clear skies and milder temperatures in a briefly won battle with the grouchy old man.  In short, we had a narrow window of perfect weather to attend the meet and greet with our little celebrity.

We drove in the evening gloom, via Port Chalmers, on windy roads over the hills to the Orokonui Ecosanctuary

I’m a little ashamed to admit it was my first visit.  I don’t have a big budget to live on and had never chosen to spend any of it visiting this place.  After this experience, that is about to change!

From the moment we entered the Visitors Centre we were greeted by friendly and efficient staff and volunteers.  Our group was about 25 strong.  It included two children, a number of tourists and several folk of the more elderly persuasion 🙂

We gathered in a small viewing room where we met our guides and saw a short introductory video on the history of the Kakapo and the conservation efforts made to save them over the past 50 years.  I felt like cheering when we heard that high hopes are held for the breeding season of 2019 as all the interminable variables are lining up in nice neat rows.

A lanyard bearing a large round numbered disc was issued to each of us with the request we wear it and don’t lose it.  If our number was not returned at the end of the expedition it would be assumed we were still out in the forest somewhere and a search would be mounted.  The tourists looked alarmed!  The locals nodded knowingly.

The centre of the Milky Way swirled in the night sky against the back drop of the crescent moon.   We walked quietly to the double gated entrance to the park.  We shuffled into the cage, getting up close and personal quite quickly with our fellow adventurers, while the first gate was closed and the second opened – and we were off on our 15 minute walk to Sirocco’s enclosure.  Less of a walk and more of an amble the crunch of feet on gravel pathways quietened the calls of the nocturnal singers.  But when we stopped moving they quickly resumed their warbling and calling.

About halfway through our slow amble we gathered on a platform beside a well grown Rimu tree and heard how the female Kakapo climbs up through the densely packed branches to feed on the tiny berries and then slips, slides and tumbles her way back to the ground.  She then makes the journey back to her nesting burrow – which could be as much as a kilometre away – to regurgitate the fruits for her youngster.  She can make this trip eight times each day for each chick she is raising.  And we think we have it hard!

I love to see how the camouflage is apparent in the above photo – both these photos are courtesy of Google. 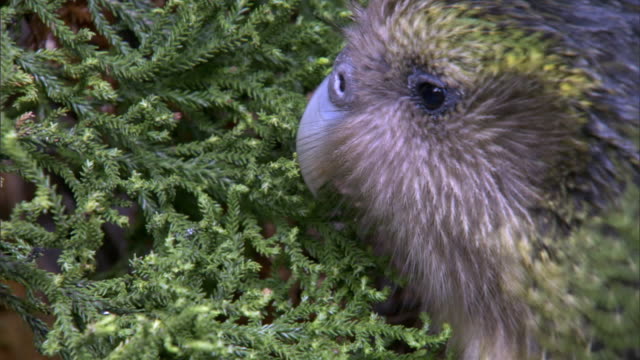 While Mama Kakapo gets on with the job of laying, hatching, feeding and rearing her one or two chicks, Papa Kakapo is nowhere in sight.  His only contribution to the next generation is to build his elaborate booming bowl and fashion the tracks that lead towards it, for the ease of access of the ladies you understand, and then to commence booming every night for up to seven hours.  His goal is to entertain as many ladies as find him acceptable as possible.   Then I assume he goes off for a bit of rest and recovery …..

Sirocco has no interest in other Kakapo at all, being imprinted on humans as he is.  So, despite being the son of the last living female kakapo found on Stewart Island in the 70’s, his is not the destiny to further the recovery rate.  His is the inestimable task of ensuring we all fall in love with and want to save the Kakapo.  And he does it very well!

As we lined up along the perimeter of his enclosure looking at him and oohing and aahing and trying really hard not to tap on the glass and perturb him, Sirocco made a slow and stately perambulation on his side of the glass looking intently at each of us.  He stopped at the children and eyed a couple of bearded blokes for a few minutes before reversing his steps to do it all again.  He seemed to enjoy looking at us as much as we enjoyed looking at him.  I wondered if he thought his handlers trotted out little groups of people for his amusement every evening.

As well as not tapping on the glass we were asked not to use the flashes on our cameras for obvious reasons.  (One poor ill equipped gentleman took a photo and his red flash screamed through the dim light, causing him intense embarrassment and as much consternation as it did to us and the poor parrot.)  My camera lay in my jacket pocket forgotten as I watched, observed, listened and entered into a conversation with one of the two handlers.

When one of his handlers entered the enclosure then we really saw something happen!  Sirocco, it turns out, really is the dog of the bird world.  The young woman entered the enclosure when Sirocco was on the ground ogling at a bearded man.  On seeing her appear he turned and put out his right foot, raising it up and stroking her booted foot as she moved past him.  He then trotted after her, just like Siddy trots after me when we are off to do something exciting – like get treats.

As she moved about the enclosure talking to the group he followed, climbing up tree trunks and through bushes with speedy agility using his taloned feet and curved beak like a third foot.  The only time he opened his wings was to either use them for balance or to show off.  Climbing was a thing of cleverness and agility and beauty.  Coming down was usually a slipshod happenstance of small leaps, accidental slips and fearless tumbles.  He sat on her hand, her arm, her shoulder.  He nibbled at her affectionately and looked at us proudly as she whispered back to him.

I could feel tears prick my eyes and a lump in my throat as I watched and thought how close we had come to losing this amazing bird forever.  Once they were common, they were everywhere in this land.  People kept them as pets and some people captured and ate them.  When I was quite young, maybe around ten or so, I was bewildered when on showing an adult a picture of my favourite bird, he told me there were none left.  I had no concept of ‘none left’.

Soon after that Sirocco’s mother was discovered.  The last surviving Kakapo hen found after an exhaustive search on the island at the bottom of the country.  Thank heaven for those early conservationists!

Danella took these two shots of Sirocco.  They are terribly indistinct, but given the circumstances a nice little reminder of the event.  He posed most proudly for her and peered benignly at us afterwards before turning and making his way off to find some more folks to charm.

I hope one day to meet Sirocco again.  Just to be near him is quite special.  He has character and humour and represents a conservation miracle.  From a low point of an estimated nine extant kakapo in the late 70’s to today’s 148 survivors the committed work to preserve the species goes on.

It’s the only time I have ever wished I was young again – I’d be off to be a volunteer on one of the predator free islands where those dedicated conservationists watch over and monitor the birds.  Wouldn’t that be something!

Thanks so much for sticking with this post.  I put in a few links for those of you who may be interested in some of the more special aspects of my wonderful country – I hope you enjoyed following along and learning about this amazing bird and the efforts made to save the species from sure and certain extinction.  So much hope, such a great birthday present!!

Love that you came by today, thank you!

67 thoughts on “Sirocco the Kakapo”