It’s been a whole month since my last post , time keeps on zipping by me and although I’m not wasting any of it I have very little to show you currently.

I did get my Seaside Stash Busting Blanket finished – and absolutely love it!   Here is a pic of it spread out on my bed complete with the obligatory poser 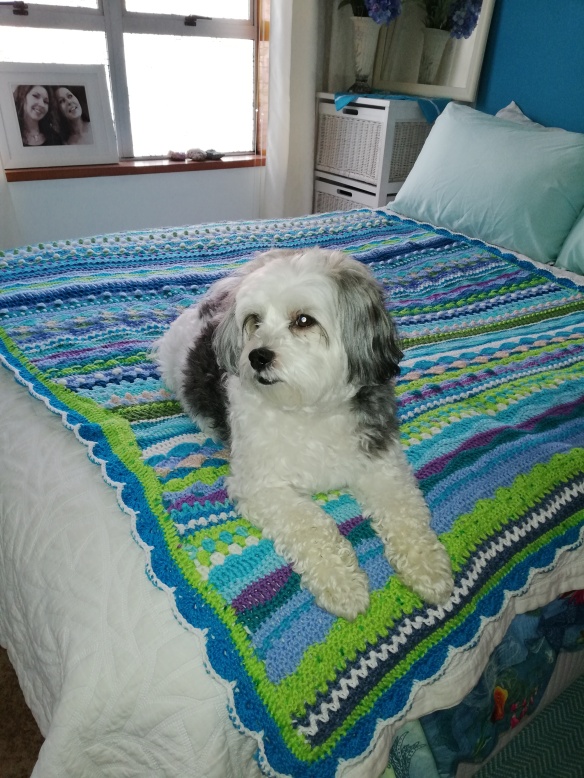 If you have a good sized stash of yarn – and even if you don’t – head on over to Eleonora’s place and follow her weekly installments, available on her blog under the header picture.

I did have an almost significant birthday a few days back and amongst the lovely cards and gifts was a most wonderful surprise from my youngest.   We will head off in a few more days to trek through the evening bush to visit with Sirocco, the world famous kakapo.

What?  You haven’t heard of Sirocco?  Where have you been for the past decade?  Come on, you are about to meet a pretty hilarious and amazing parrot! 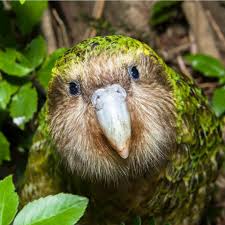 Kakapos are the only flightless parrots in the world.  They are big, heavy birds who climb trees using their claws and beaks.  They mate irregularly and have a prolonged and unusual mating ritual that involves ‘booming’.  They were almost extinct and are being clawed back from the brink by dint of human determination.

Sirocco’s behaviour on Stephen Fry’s series of ‘Last Chance to See’ some ten years ago resulted in world wide fame and instant You Tube infamy and as a result he became New Zealand’s official spokes-bird for conservation and most importantly the conservation of our native flightless bird population – and even more importantly the kakapo of which there are now 149 up from their lowest point of just 25.  This short clip kind of sums it all up

If you are interested in learning more, the link below will take you to some relevant pages on Te Ara, the encyclopedia of New Zealand.  I’ve started it with the male Kakapo sitting in his bowl ‘booming’ his mating call out in the hopes some wandering female will pop by …….  He’ll do it for hours and days and it becomes pretty obvious predators aren’t the only reason why these quirky birds are endangered!

Kakapo generally have a reputation of being fearless, inquisitive and friendly birds.  An early Governor of New Zealand, back in the day when kakapo were still plentiful, was said to have been given one as a pet and compared it favourably to a dog.  Sirocco’s ill health as a chick meant he was taken from his mother and hand raised.  He imprinted on humans and, it seems, specifically the male of our species and as a result has no interest in ‘booming’ for kakapo hens.  He will boom for humans though.  Despite a couple of years in therapy and some training in acceptable behaviour (some of which you can see on YouTube if you do a search) he is not likely to assist in the increasing of the kakapo population, so Sirocco happily takes himself off round the country from time to time, sets up digs in a suitable outdoor hotel, is waited on hand and foot by his adoring servants and accepts brief visits from small groups of his adoring public  – of which I shall  happily be one.

Not many of us get to see a real live kakapo.  They now live only on two small islands that are kept scrupulously pest free – no rodents,  no predators of any kind.  The only humans allowed are those entrusted with their care and scientific research into their lifestyles.  Given those living conditions and the fact that they sleep all day we are really fortunate to have a bird who likes people and who enjoys looking at them as much as they like looking at him.

Any how, I’m really looking forward to it,  I just hope I don’t get lost in the bush on my way to my date with Sirocco   🙂  I’ll let you know how I get on.

89 thoughts on “On Blankets, Birthdays and Endangered Parrots”