I knew I was long overdue for a post.  It was on my mind to write one, but so is getting Narf77’s organiser finished and off to her.  Time for these things can only be snatched in small increments it seems when you have a puppy.  And a petulant cat.

But Laurie over at Life On the Bike and Other Fab Things asked how we were all doing this morning and spurred me into action.  So immediately I had cleaned out the potty, petted the cat, cleaned up the accidental pee from over excitement at the thought of getting at the cat – [Siddy, not me!], bathed the dog, dried the dog, brushed the dog, petted the cat, washed the floor, retrieved and put my shoe away again, fed the cat, thrown a ball for the dog and carried/danced the cat around the house with Bruce belting out on the stereo just because he likes that and retrieved the torn up paper scattered about the house by the dog whilst cat and I were dancing, played with the dog again because he obviously felt left out, IMMEDIATELY I had sorted all that, I sat down to write this post.

It’s nearly mid-winter here at the bottom of the world.  The days are short.  The weather is variable.  Four seasons in one day is common place – those Finn Brothers are after all from here, they knew what they were talking about!

This was Orlando and me before

This is us after 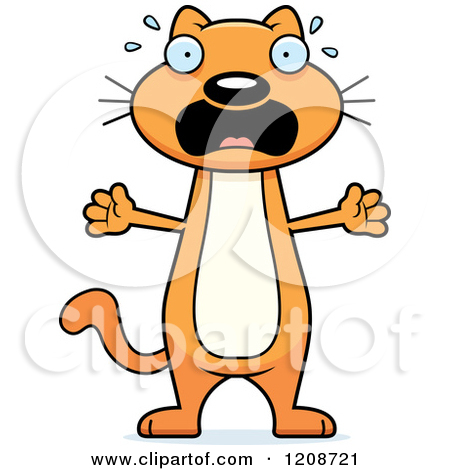 Siddy still hasn’t had all his puppy shots and my vet strongly recommends keeping outings to a minimum until he is fully protected.  Isn’t it odd – I don’t believe in vaccinating babies – and didn’t – but I am doing as I am told with a puppy.  I live in an urban area and I don’t want to take any risks.  No dog parks or beach walks for us yet, just surreptitious little outings around the block when the coast is clear.

Also, our puppy classes have been delayed due to illness.  So I have to be creative in keeping my puppy exercised and happy and busy.  Luckily for me, Will over at Marking Our Territory got himself another new pup just recently and, as it was mostly his fault that I stopped thinking about it and actually went out and got my own new pup, I shamelessly follow along and copy everything he does.

Will is an excellent dog owner and he does ‘training’ sessions. So we do ‘training’ too.

‘Training’ works really well.  Siddy can ‘sit’ on command, ‘stay’ and ‘come’ when called.  He has learned to ‘lie down’ with the movement of my hand – no voice – and almost has the idea of ‘rolling over’ also with just a hand movement.

He is brilliant at training, possibly the cleverest little puppy in the whole world and we are both most pleased with him!

Then someone else enters the house and it all goes over his head straight out the window, through the door and down the street!  We just have a mad whirligig of a leaping, yelping, whimpering, bum waggling, cannon ball of white and black fluff. 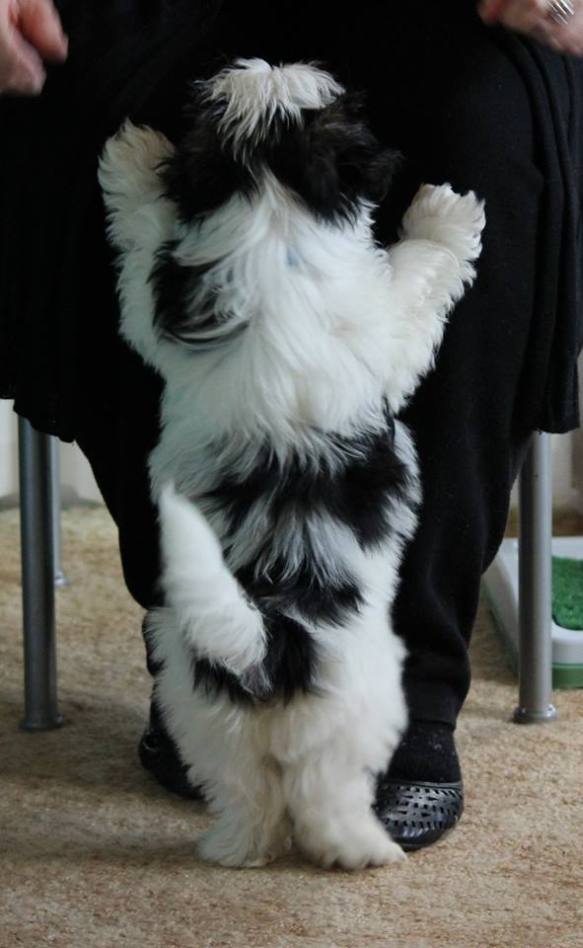 We also do ‘leash training’.  Leash training works quite well too.  We do it in the house, up and down the hallway, round the living room, out into the courtyard and the car port area.  We walk beautifully together up and down the path between the two houses that share this section.  I walk along with a loosish lease, head up, a certain briskness in my feet and puppy trots along beside me.  Head up, close in, neither ahead or behind.

It is textbook perfection.  Someone should video this to show everyone else how easily it is all done.  Siddy and I are one, trotting happily up and down the pathway, a brief rest at each end for a treat and we head off again for another twelve metre stint.

When we do actual ‘leash walking’ it is entirely a different story.  There are smells, lamp-posts, distractions galore.  This photo is from the day he came home, nothing much has changed.

Siddy is now 11 weeks old.  He has almost doubled in size.  In no time at all he will look like a real dog and less like a stuffed toy.

Before he was unaware of anything except what was in front of his nose, now he is aware of outside sounds and noises and comings and goings.  He stands on alert when a car pulls up, a voice is heard.  He told me when a pot in the kitchen was boiling over. How’s that for smarts?

He loves to steal my shoes from my bedroom and refuses to believe I mean ‘No!’. Probably because I think the sight of a small rotund puppy, head held high, red suede shoe firmly held aloft, scampering down the hallway as fast as his little legs will carry him is hilariously funny.

He has been stood on a hundred and six times and still doesn’t get that being underneath my feet in the kitchen is not a good idea.  Every time he gets stepped on he yelps loud and long.  I expect to get arrested for puppy beating at any moment.

Siddy LOVES Orlando.  Siddy wants Orlando to play with him just as Mr Fox and Ms Bunny do

Orlando is still living in hope that Siddy will disappear as suddenly as he arrived.

Orlando has come a long way though.  Whilst still preferring high places, the top of the fridge and the top of the hutch have all been cleared of their pretty and useful things in order to make them pet friendly areas, he does come a bit closer to the floor from time to time:

Sometimes he allows his rather luscious and luxurious tail to droop towards the floor, which drives a little pup into a frenzy of leaping and whimpering and scrambling about for a foothold.  Yes, there is a bit of teasing going on because – well after all – there is always a wee pup not too far away………….

There is a nice morning ritual that has been in existence for about ten days now.  Orlando is on his kitchen bench, I pick up Siddy and hold him, waiting for him to become quiet – or at least quieter than moments before.  When he is satisfied at the energy level, Orlando stretches his head toward the quivering, barely controlled puppy and they touch noses.

Puppy usually explodes with joy at this point and is quickly replaced on the floor before he bursts and Orlando quietly sets about partaking of first breakfast.

The first time it happened my heart burst with joy too – it was a small miracle.  It felt like a  forward movement – maybe not peace, but at least a cessation of armed combat.  It’s been getting better and better ever since.

I no longer have to go and search for Orlando outside and carry him to his eating place or resting place.  He comes in the door now despite the capering, happy puppy standing right there.  He simply jumps over him and up onto a higher place.  He asks for hugs and dances and cuddles again and even acquiesced to a brushing, provided I did it on the table top and not on the floor.  I used to have a rule about Orlando and table tops.  It has been slowly eroded over the past year or so and now has vanished entirely out the window along with all Siddy’s cleverness at tricks when visitors come calling.

I feel my life organisation skills have been all out of sync lately.   I did a lovely make-over and then got a puppy.  Something is truly wrong about that progression!  So much for being an example to my clients 🙂

Yesterday when I was conducting ‘training’ with Siddy, Orlando lined up for treats too. Despite refusing to ‘sit’, ‘down’, ‘stay’ or ‘come’ he got some.

Time in the creative room is severely curtailed.  Last time I managed a couple of hours which pleased me greatly, but that was four days ago and, between pets, visitors and clients, I haven’t been back since.

One of my mantras is ‘When spring comes I’ll be able to spend more time creating’.

I live in hope that one day soon I shall publish a one photograph, no word post on this blog.  It will simply be a cat and a dog sitting side by side.