………. and here I am again.  There are various reasons for the long break, not all of them completely acceptable to serious bloggers or even myself.  Let’s just say “Life got in the way of blogging!”

It’s been a hard winter here in the Riviera of Antarctica.  Part of my city is being claimed back by the wild southern Pacific Ocean or being flood damaged by this new set of climatic conditions.  My dream of a cottage by the sea is on hold as it may no longer be a sensible place to consider putting down roots.

My art room has been partially given over to another and my painting hours have temporarily ceased.  I have been knitting, crocheting and making light-catchers instead.

Crochet: One Bavarian Stitch Throw of the very giant variety, not finished at the time this was taken, but now complete and waiting for blocking to happen.  It is so big it took 300g [6 balls] of yarn to finish the last round.

Mittens:  A variety of Mimi’s and Bohemian Mittens are about to begin winging their various ways around the globe to those of you who are still waiting their winnings. 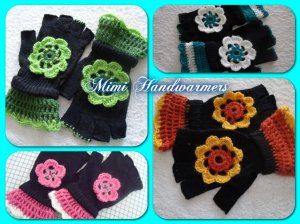 Light-Catchers:  Here’s one photographed on a rare fine day in the garden before beginning it’s journey to someone special in the USA

I have made my light-catchers for a few years now – rather sporadically, as I enjoy making them especially for someone.  They are my gift of good wishes, good fortune and a  little bit of magic woven into beads and charms and crystals for someone special.  I like to think of the person I am creating for, then I choose colours and shapes and crystals and charms especially for them.  Then it all just weaves itself together.

Light-catchers are extraordinarily difficult to photograph – here are two simpler versions that just happened to be lying around on the work bench, coming to completion 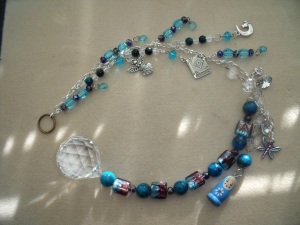 They look nothing very exciting lying around thusly – but hang ’em up and watch the magic happen.  A tip for those of you who have a catcher is if you hang them away from the window, maybe further out into the room, somewhere the sun’s rays filter in, even more magic happens!

I can’t leave you without a quick peek at the snoozing buddies – I’m under there somewhere.  It took the better part of a year, but we are all together with harmony reigning at last.

Though there is so much more to tell you about, this is all the time we have for now – So, it’s ‘Good Night’ from Siddy

And ‘Good Night!’ from me.  Thanks for coming by today, I’m so happy that you did.