Back at the end of February I made the decision to pick up my sketch pencil and paint brush again and work my way back into some form of art – not the highbrow sort of ‘Fine Art’ produced by proper artists, but my sort, the playing around with colour and form and doodles and a certain whimsical expressionistic view of the world.  It had lain fallow for a long while as I got sidetracked down various other pathways and I was feeling disconsolate with my lot and that feeling is always alleviated with a pot of paint or an assortment of coloured pencils in my hand.  March, I decided, was the month!  I would sketch, I would paint, I would doodle and I would put up a post every week for the whole month.  And I did.  But of course there were some unexpected events and unexpected posts made during the month of March, much of my output was ignored in favour of things that really matter.

So now my friends – hang in here with me – it’s catch up time!

A post or three or four back I showed you my first Teddy Bear watercolour painting, I’d had some prints made and turned them into cards. Here they are again, just to jog your memory, because I know you won’t remember her 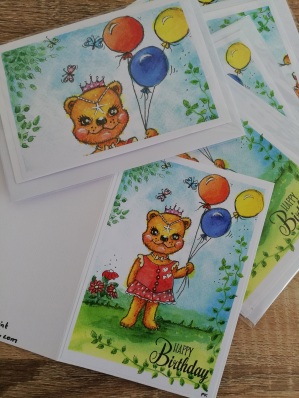 I went on and sketched out two more Teddys – handsome fellas this time. This is the first one, worked in alcohol ink pens on yupo paper

I was feeling happier with the drawings. This bear looks friendly, I made another – with an even bigger tummy and trousers on this time – just to dress him up a bit more you understand ….

I had prints made and produced some cards

But I quite like the tummies – they are comfortably familiar 😀

And I have a favourite. Can you guess which one?

Thanks for coming by today, love that you did!