There’s activity in the happy making room again …  well, I shouldn’t say ‘again’ in some ways it didn’t really stop.  I made lots of cards there for a bit, but forgot to take photos of any of them except this one, which kind of reminds me of Siddy and so I kept it

But there’s been some playing with beads going on 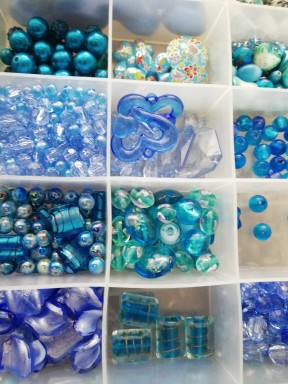 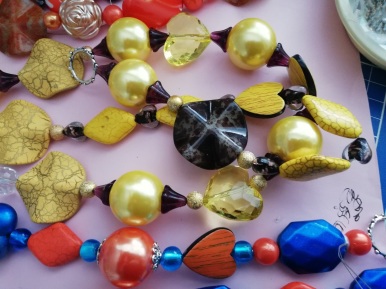 Also, somewhere along the line I had decided to make a concerted effort to rid myself, or at least make a serious dent in, the cupboard full of of left over and unused yarns that have been accumulated over the past two decades.  I had been on the lookout for an idea or inspiration and then happened to mention it to Nana Cathy who sent me over to Coastal Crochet and voila!  The perfect thing for me and, at just nine weeks behind,  I caught up in two weeks.  As you can see my yarn cupboard holds many different shades and hues of blue and even that green has a blue thread running through it – I have no clue how that grape colour got in there!

It’s a slow project, the designer Eleonora is adding just 4 or so rows every week, leaving plenty of time for other creative projects to continue too.  Which is really good, because on arriving home from my Blogging Babes Reunion and collecting a bag of mail from my lovely neighbour I found it included two big letters.

One, from The Wool Company, contained a catalogue and a gift voucher and a note saying to do nothing until I received an explanatory letter….. and the other from my friend who blogs, Jan, over at The Snail of Happiness containing the explanatory letter and a ‘Persian Tiles’ crochet pattern

Jan explained she had seen a comment I had left on a mutual friends blog who was making the Persian Jewels blanket, that if I lived in the UK I’d be definitely buying that kit to make up and she decided that not living in the UK was no reason to not be able to make my own ……

You can see why I wax eloquent about the joys of blogging right?   I am once again made speechless by the kindness, love and generosity heaped on my tiny head by fabulous people!!  I sat in silence for a long time reading and rereading Jan’s letter and looking at the note from The Wool Company, then I packed it all up and drove off to my daughter’s place and showed her and we both sat in silence and revelled in the wonder of having wonderful friends, met purely through blogging.

A week passed by while I looked and considered colour options, eventually this is what I chose – it’s 100% NZ Corriedale wool, 8 ply from The Wool Company

Aren’t those just the best colours!  Though that red hank is not red, it’s ‘Azalea’ a bright pink.  There are seven different colours and as soon as I have finished wrangling those 200g hanks into giant balls I will begin to crochet my first square – I can’t wait to get it underway!

Jan you are brilliant and thoughtful and kind and I am so happy to have you as a friend – thank you so much!!

And to finish, here’s a shot I took of Siddy and two of his favourite admirers having coffee a couple of weeks back – I wonder what they are talking about …..

That’s what I’m up to, I’ll be back with more in a week or so.  What are you making right now?