For my dear friends who have been reading this blog for a while  – and especially those of you with good memories – there may be some recall of a post not so very long ago where I noted the decline of my handsome boy as feline dementia took a hold of him.  It’s here if you want to check up on that one.  It’s worth reading just to get a background for what follows.

Not being one to take the common route through life, I started doing my own research into feline dementia and cat health generally after my vet talked to me about the illness, the medication involved, the cost and the inevitable outcome.  I mostly mused on certain things that had been happening with my little fellow’s diet and how I had some inbuilt misgivings about the food I was feeding him.

As a person of the human persuasion I know very well how food affects our general health, how commonly used foodstuffs weaken and poison our systems until disease and discomfort are our constant companions.  I know from my own experience that eliminating certain foodstuffs and processed foods can result in disease and discomfort disappearing from my life.  Why can’t it be the same for a person of the cat persuasion I wondered.

Let me explain.  Over a period of time – perhaps the last year or two prior to his increasingly odd behaviour and diagnosis, Orlando had been narrowing his preferred foods.  All cat people know what that means.  If the kitty don’t like it then the kitty won’t eat it – starvation and death are preferable options apparently rather than eating something that doesn’t appeal to their palate.   Orlando had been so successful at this that he had eliminated almost entirely consumption of his special Maine Coon dried food and any other wet or tinned food other than the Dine Desire brand ‘Tuna Fillets and Prawns in Seafood Sauce’.

Having a particularly twisted sense of humour, ever since Fukushima I had often taken to dishing up his food and placing it before him with a wry take on the ‘enjoy your meal sir’ comment such as ‘Enjoy your radiation imbued dinner sir’ or some-such other entirely inappropriate wording.

Every time I said it I wondered how true it might be.  Was his fish carrying dangerous levels of radiation?  I now began to research and found it difficult to get definitive answers – as was mentioned many times Fukushima has been the first meltdown of such proportions and there is no backlog of evidence to weigh one way or the other.   Proponents of nuclear fusion say no, anti-nuclear proponents say ‘yes’.  Here’s a link to an interesting blog post on the topic.  My gut said ‘Yes!’

I had long ago researched animal health and prepared foods and found some alarming evidence that maybe we weren’t doing the best thing for our pets in feeding them commercially prepared animal foods.  I came to that information too late to make sensible choices for Orlando, but Siddy has never eaten commercially prepared dog foods – apart from his highly necessary supply of ‘treats’ that is.  (Such a Very Good Boy must have his treats!)  His major food is ‘puppy stew’ cooked by me with fresh meats and vegetables and nothing else.

Soon after I wrote the post previously mentioned about Orlando’s diagnosis I took action.  I took him off all canned food and all fish.  Cold turkey!  I insisted he eat his special Maine Coon dried food and hand fed him as necessary.  I enticed him with puppy stew – fresh cooked meat with organic potatoes and carrots – he would have none of it.   In the end I had to purchase packets of prepared cat food containing meat products only and this he reluctantly agreed to eat as long as I stood nearby with spoon at the ready to hold up the food to his mouth so he could lick at it.  I also kept him pretty high with a constant supply of his favourite drug – dried nepeta  (catmint) in little baggies.

It really didn’t take that long to convince him to change, it just felt long at the time and required a lot of standing around offering tidbits and being encouraging and singing to him that he was a clever kitty ……  It wasn’t much longer before I noticed that changes were happening and then it was all remarkably quick.  It was so quick I wondered if I had imagined it all.  My cat who had definitely been behaving differently, who had become paranoid and skittish, untrusting, unfriendly and – let’s face it – highly trying;  who threw up often and inconveniently (once projectile vomiting from the top of the refrigerator) disappeared without a trace.  I woke up one morning, about four or five weeks after first changing his diet, to the purring sound of a happy kitty cuddled up with his puppy friend as they waited for me to stir and stretch and get up to serve them first breakfasts.

And just like that he was back.  The dog of the cat world.  Coming when whistled, greeting me at the gate sitting up on his haunches with this front paws held up for his special lift up, cuddle and carry. 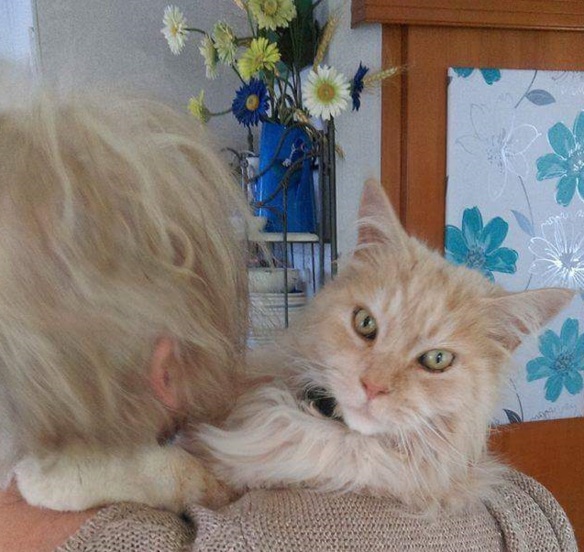 Orlando is now coming in when the door is opened without a pause.  Eating what is offered.  Joining in whenever there are treats to be had…….. 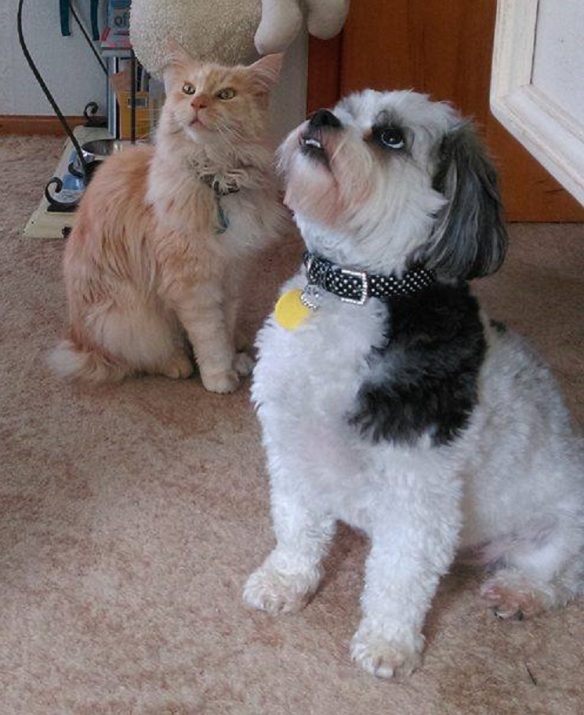 Causing Siddy to become delirious with joy by patting the air vaguely in his direction twice a day.  Watching the ensuing mad dash round the tiny house with a look of incredulity and some disgust on his face. Sharing the bench under the window with the puppy when the sun shines on it and if necessary sitting on top of the puppy if he doesn’t move when required.   Sharing the space in the chair beside me.  Claiming my knee on an equal time basis with the puppy.  Visiting with friends.

A happy, healthy, elderly cat.  Regal, collected, clear.  Not a drop of dementia in sight.

Tell me, do you have food related stories about your pets and their health?    I’m very interested and I’m sure others are too, please share.