My friend Laurie who blogs at Life on the Bike and Other Fab Things had a birthday recently.  It wasn’t one of those ‘significant’ events but still,  I felt it was time for me to celebrate this amazing woman.

I met her via another mutual friend, the delightful Boomedeadda who noted on her blog when Laurie had sustained horrific injuries when her bike was crashed into by a car.  It took pretty much two years for Laurie to rebuild her body and her life after this event – but one of the wonderful things that came out of the whole awful thing was that a lovely friendship built up and grew.   Laurie was one of the bloggers I flew to the US to meet up with two years ago.

Let me tell you just a little about this woman and why her painting looks as it does. Laurie is a full time, sought after Nurse Practitioner.  Her patients adore her and rely on her.   Her work is demanding, with long hours and high standards of professionalism to adhere to.  Despite this, being aware there is a dearth of women in politics in the US, two years ago Laurie ran for her State Legislature on the Democratic ticket, in an area that historically voted Republican and male.  She narrowly missed out on winning. (She now actively supports the latest, male, candidate in his bid.)

An active member of her local community over many years Laurie’s dedication and pride in her town and the surrounding areas was palpable when I visited.   She takes an active part in the ‘Ride of Silence’ every year.  A thoughtful and touching tribute to those who have lost their lives in cycling accidents and a punchy reminder to everyone else of how quickly these events happen, how devastating they are for family and friends and how often these avoidable accidents occur.

Despite her active civic and political life Laurie has a huge circle of friends, a busy ‘things to do’ schedule that leaves me gasping for breath and needing a cup of tea and a wee lie down just hearing about AND a big red truck and a big red motor bike – a Harley Davidson no less.

This tiny, feisty, beautiful brunette drives or rides about with her camera and takes fabulous photos wherever she goes.  And then, when she has a moment she blogs about her rides, drives, trips and adventures.   She is positive, upbeat, cute, funny, capable, energetic and motivated – she’s pretty jolly amazing really!

Laurie makes a difference –  She works hard, knows how to play and enjoy herself and cares about her community, her family, her many friends and her country.

And this is what I wanted to hint at in her painting – she’s a Woman Who Can – and she does!!

If you haven’t met her yet, pop on over and say hello, tell her I sent you if you like – I know you’ll love her, just like  I do. 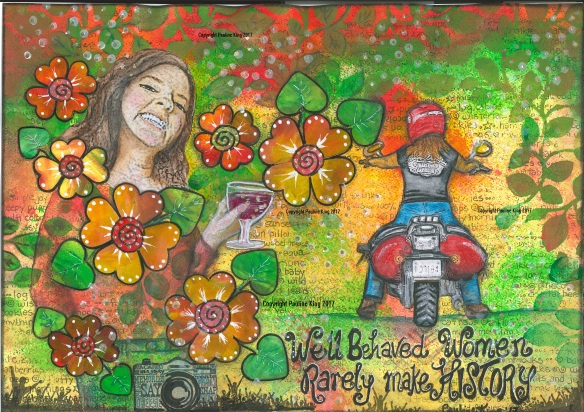 This is a mixed media painting on 300 gsm media paper, size A3.