The Wonder by Emma Donoghue

She wrote ‘Room’ which was made into a movie.  Did you see it?

In The Wonder Emma Donoghue was inspired by the phenomenon known as ‘the fasting girls’. apparently wide spread in terms of both global reach and ages, with fifty cases documented and no conclusions necessarily drawn.  She tells the story of Lib, an ‘educated sceptic’, a nurse trained under the great Florence Nightingale who is summoned to Ireland to become an observer of an 11 year old girl, Anna, said to have been months without food yet still thriving.  Entering into an impoverished and pious household Lib is determined to discover the truth.  How is the child being secretly fed, by whom?

It’s hard to feel warmth for Lib as she bumbles about in a community that makes no sense to her.  Yet as her heart warms towards the child, so we warm to towards her. It’s an engrossing story, with an unexpected ending.  How far would you go for the love of a child? 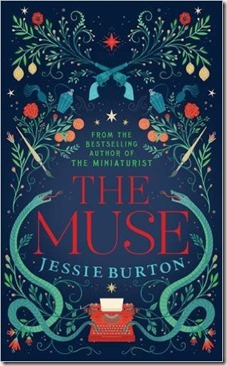 The Muse by Jessie Burton

This is her second novel, the first being ‘The Miniaturist’ which I reviewed relatively unfavourably ages ago.   I was assured this was a very different read.

It was.  It is unusual, intriguing, multi-layered and contains a bit of a mystery…… a great mix for any novel!  The story moves in place and time between London in the late 60’s to Spain thirty years earlier.  We meet two young women, both it seems dealing with a feeling of inadequacy about their art, unsure of who they are and what their place in the world might be.

It begins in London, 1967 where Odelle Bastien, originally from Trinidad and now living in London for five years is still looking to find her place –   a home, a good job and publishing success.  Abruptly life changes when Odelle is offered a typists position at a London Art Gallery under the tutelage of the glamorous Marjorie Quick.  About the same time a lost masterpiece with a secret history is delivered to the gallery.

The story moves to Spain 1936 as Civil War breaks out and the Schloss family, Harold and Sarah and their 19 year old daughter Olive take a finca and become acquainted with the young artist and revolutionary Isaac Robles and his sister Teresa.   The five become entwined as danger and unrest moves ever nearer and tragedy unfurls around them.

Moving between the two stories a mystery builds and I enjoyed following the clues that lead to the eventual outcome – not quite what I expected it to be!

I’ll start by saying this is a book I would definitely not have chosen to read had it not been written by a writer I admire and fellow blogger and Master of All Genres Geoff Le Pard.   On his blog, Geoff  practises  his art, flexing his typing fingers and  letting his imagination go where it will with weekly doses of short or shorter writing prompts.   And nearly every one of ’em a gem!  Many of his stories are humorous.  This novel however, is not one of that kind!

The subject matter is grim, the reality gritty and Geoff pulls few punches in leading his readers into the harsh, sad world of the underbelly of London.  Peopled by survivors of dysfunctional families, featuring the lot of immigrant workers, drug addiction, homelessness and hopelessness and dealing with survival, betrayal and revenge.   I found it hard going at first.  The situation is grim from the start, the characters are not easy to love, their lives are messy, they are messy and things just keep getting messier.  Despite this however, somehow I was drawn in.  Empathy kicked in. Once that happened I was hooked, I needed to know somehow, somewhere, there would be redemption for someone.

The chapters are short – and get shorter as the book progresses.     Each chapter is headed by a place and a time.   This becomes imperative reading as the novel progresses and the pace picks up.  The short chapter format is an excellent device, it’s like watching a movie where the scenes switch between two or more places as the characters reveal more of themselves, as the tension builds and we sit on the edge of our seats, holding our breaths watching, waiting, hoping  ……  Every time I review one of Geoff’s books it seems I can see it as a movie.  This one is no exception.  The first was a comedy, the second a drama and this one gets filed under ‘bleak’ as in films like, say, ‘Trainspotting: I and II’ (and I say this without ever having seen either of those particular films, but I saw the trailers and that was enough for me).

Bleak!  But as I closed the book there was a certain satisfaction, there was redemption,  there was heart, there was hope.  And I realised I had grown to know and become fond of many of the characters that  shuffled through the pages.  And that, from this reader’s point of view, is quite something!

I have just one harsh criticism to deliver Mr Le Pard sir.  Please don’t end your book on page 280 and without blinking give me Chapter 1 of your next novel on page 281.  I needed time to sit and think and relive what I had just read and to allow the characters to file before me so I could weigh and measure and say – well, yes, there was redemption and there is hope.  And to stare at a blank page while doing so.  This is how I come to terms with the end of a good story.   At that precise point I didn’t give a damn about either Buster or Moo!  (But now of course I’m quite looking forward to reading that tale!)

So there we go folks, three of my latest reads – from which I learn that judging a book by it’s cover (or it’s predecessor) may not necessarily allow me the opportunity to widen my world view or deepen my understanding of people.  I’m grateful to all three authors for taking me into unexpected places and thereby enriching me and adding to my gratitude for the life I live!!

If you’ve read any of these books please do chime in with your responses and if you haven’t read them, stick them on your ‘books to read’ list ……  I’d love to know what you think afterwards.