Those of you who have been reading and following for some time know I live in a teeny tiny house with a teeny tiny outside space that I have over four summers experimented with.  First I planted some climbers and perennials in the sour and empty soil.  I buried garden waste for a year, planted lavender, thyme, mint, parsley and other herbie type things and watched as over a year everything began to grow at a rate of knots.

Then last summer I decided to grow my own vegetables and turned the teeny-tiny courtyard into a salad lovers nirvana.  Everything grew extremely well but I had nowhere to sit and enjoy the lovely summery days and evenings.

As I live a stones throw from the best farmers market in the country with a full and exciting complement of organic vegetables, this year I decided to claim back the space and make myself a lovely outside room for the wonderful summer, which I am told, is about to descend on the southern hemisphere.

This is my aspirational picture:

Now I know I can’t have much of what is going on in there – the courtyard is half this width to start with – nor do I want to spend the summer heaving myself up and down off the ground – but the colour and the texture and the ‘come hither’ vibe is what I’m going after.

As Robbie Burns so famously said

The garden was left to wither and fester and give up the ghost over the long hard winter not yet entirely passed, so that the spring clean would be a bit of a doddle.  [Throw in another ‘Hey-ho!’ if you feel so inclined round about here.]

I bought six super large trash cans, thew away the lids and planned to fill them with my super composted soil and distribute said trash cans tilled with super soil on top of the other grey concreted areas surrounding my teeny tiny house and introducing some much desired green into my daily viewing pleasure. 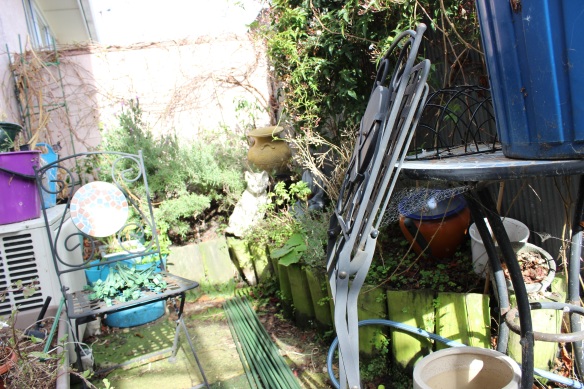 That photo was taken the day I started work.

The plan – have I told you yet? – was to remove all the built up gardens and make more space for a larger table and four chairs and just to have the newly potted jasmine and some smaller pots of colour and maybe a few cloths and dangly things and some bright coloured cushions on top of some new chairs and don’t forget a nice new table with maybe a pretty lacy cloth draped beguilingly over it …….

The rusty old fence would be painted in a fetching shade of blue-green and the concrete slabs power blasted clean and maybe painted a fetching brownish-greyish shade to ground everything.   The magnificent Boston Ivy would be cut back severely and put in a tub.  The magnificent jasmine would be encouraged to keep as many of her tendrils as possible and would also be tubbed.  The rest would be sacrificed to make way for smaller, tidier, newer and more colourful pots of flowers.

A word about the trash can utilisation – are you curious?  Trash cans are affordable – clay pots the size I need are not.  Trash cans also keep the soil damper than clay pots which are inclined to dry out quickly in the heat.  Holes are drilled around the sides, about 30 – 50 cm from the bottom, depending on the kind of plants that are going in. Then pebbles are poured into the can, up to the hole height.  This is the water catchment area.  Excess water drains out the holes.  Fill up with soil and good compost and plant away.  It worked a treat for me last year, though I was using smaller tubs rather than trash cans, but the principle is the same.  Place smaller tubs in front for maximum disguise and over plant for maximum effect.

This was the scene after four months of zero sun in this courtyard and constant rain and icy temperatures.  All that is alive is my hardy and much loved jasmine and a rather bedraggled and woody lavender. 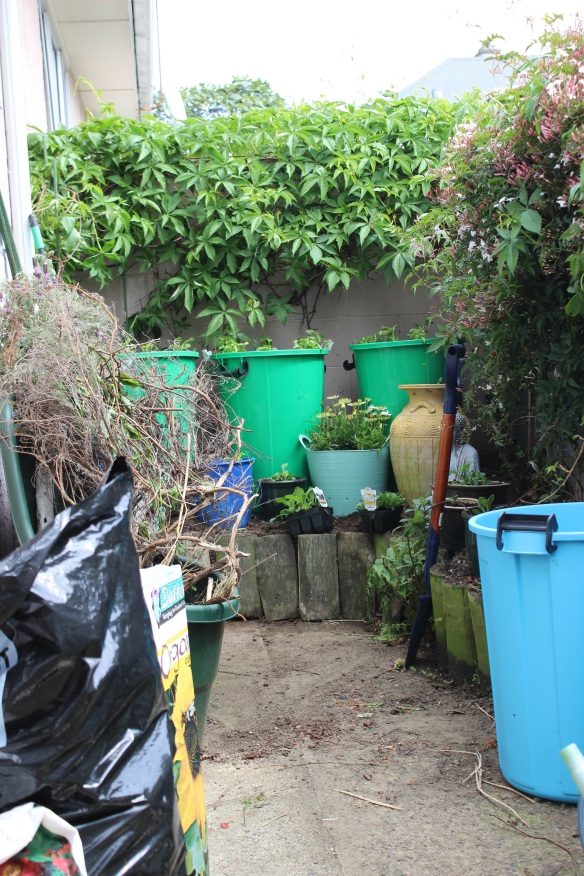 And I’d hit the wall – the built-up garden was maybe a metre smaller than before, the six trash cans were all filled with rich black soil, planted up with native shrubs and some petunias and lobelia and lined up outside the kitchen door, where in time to come they will offer me a nice screen between my kitchen exit and my neighbours front door.

Black garden bags were filled with the dead and dying – the aged garden furniture was designated new status as pot holders, every available container was planted up with a mixture of pansies, lobelia and petunias and random self sewn herbs and vegetables from last season.

Three more trash cans had been purchased, filled with soil and heaved on top of the remaining garden beds, because there is nowhere else to put the unwanted dirt.

I’ve realised that my original scheme is going to require some creative thinking.  So far I have images from the movie ‘The Shawshank Redemption’ going round and round in my head.  This requires me to pour a trowel full of soil into my pockets, and every morning as Siddy and I wander through the green and leafy surrounds of our park, to shake said soil loose and leave it there.  I’ll have the remainder of these built up gardens gone in about half a century I guesstimate.

But, never give up, never say die!  In the meantime while I work away on that plan, here is what I’ve come up with for this summer:

What you can’t see from the above photo is that the trash cans are planted up.  There is a Meyer lemon, a Papa Meilland rose and a winter flowering Viburnum; each one surrounded by hanging petunias and lobelias and pansies – come Christmas it should be a riot of colour, a sensation of scents and all the plastic containers will be invisible.

Except I bought $12 plastic chairs.  Not knowing yet if I can remove the remaining built up soil without the rusty old iron fence falling down or the old brick wall at the back toppling over, I thought it best to hold off on my super-dooper wrought iron bohemian style table and chairs this year and make do……. and these are surprisingly comfy.

This is my chair – that’s my book keeping it safe for me.

The heat pump engine is mostly hidden beneath a bench which holds all the pots that are coming on as replacements as required.  It also holds a sun-drenched corner kept especially clear so one pampered kitty can stretch out and get his daily dose of vitamin D.

Siddy has claimed his chair

It’s a work in progress and all I can say is that one of the blessings of living in a teeny tiny house with a teeny tiny courtyard is that one spends a great deal of creative time making things work.  This courtyard works as long as no more than three people and a puppy and a cat are here at any one time.  Although, if you fancy dropping by, we could squeeze a fourth onto the step if pushed – there’s a spare cushion.  🙂

And I’m sorry if you came by looking for the give-away – it will be up in a few days.   Promise.

And for all Siddy’s fans, here’s a smile especially for you 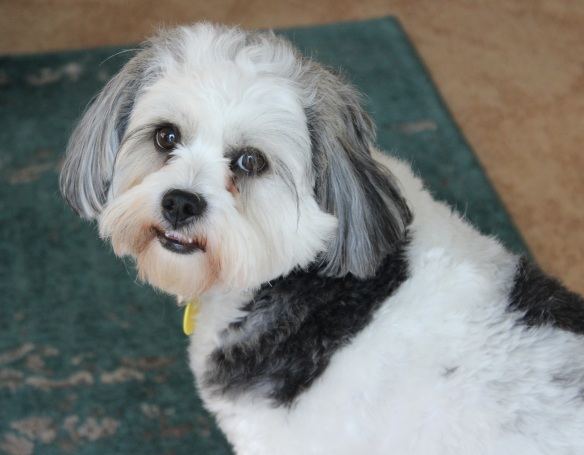 131 thoughts on “The Teeny-Tiny Courtyard Make-Over”