October was a make it or break it month for me creatively.  I was way behind with so many projects – even my garden remained semi planted as I spent time doing things other than what I really wanted to do.

I started a painting way back in April.  At the time it was to be the first in a series of ‘Soul Portraits’, gifts for friends featuring my take on the preciousness of them, their lives, their gifts, their creativity.  Of course, I bit off more than I could chew and my first feeble attempts were unsatisfactory and I happily left the work sitting for days – then weeks – while I wondered about what to do next…….

What happened next pretty much brought life as I knew it to a complete standstill – if you read my blog regularly you know what it was.  Next I adopted a puppy!

Puppy put a stop to all serious creative play for four months.  When he got big enough and well mannered enough for me to set to work again I didn’t know where to start.  All through September I tried to start.  I never really got any where – I saw 2014 passing before my creative eyes with nothing more than some crochet throws and knitted bunnies and a few less than perfect bookmarks to show for it.  I felt like I had forgotten how to paint.

I’d ‘work’ on the painting on my desk.  Put a bit of colour on it, collage some papers, write some words and paint over them again.  I sketched out the layout, started the face and stopped again.  I wasn’t sure how to do what I wanted to do and I was thinking about it too much.  I walked the dog.  I went out and about.  I read.  I gardened a bit more.  I avoided the art room.

I missed sending away the completed painting in June, which had been my first deadline, in July, my second deadline.  I missed sending it to celebrate my birthday, and then I missed Alys’ birthday too.  The painting was moving from room to room, being placed where I could see it and figure out where to go next.  It lived in my bedroom for a few weeks, the last thing I saw before sleep and the first thing I saw on waking.  Still nothing.

Alys sent me some stamps.  These were special stamps.  They had belonged to her late father, an avid collector and Alys had decided to share them with those of her blogging community who would like some.  They were precious to her, she was sending a little of her beloved father out into the world.  I had said, send me some and I shall incorporate them into a painting for you.

I knew what I wanted to do with them, but starting was also scary.  There were only so many stamps, if I mucked up there was no going back.  I sorted the stamps into colours and pasted them onto the brittle with age album paper they had come on.  I took a deep breath and embossed the pages.  I cut out shapes using three different punches and left it all sitting in a pile on the desk while I prevaricated some more.

October arrived and so did the dear girls, El and M, over at Fat Bottomed Fifties with their October Goalfest Challenge.  They wrote a blog post which pretty much said ‘Come on Pauline, quit mucking around and get on with it.  You’ve got til the end of the month.’

I signed on and immediately came up with more reasons why I couldn’t ‘get on with it’.  Then El said ‘Let’s help each other out here’  Well thank god for my pal El is all I can say.  Now there can be no more mucking about. I have a job now, I have to support her while she gets her bike roadworthy and then gets herself on it and cycling twenty miles without ruining her  butt bones if possible.  I looked it up because I knew I had the wrong words in my head.  ‘Saddle soreness’ is a much nicer way of saying it than my chosen phrase and the ‘ischial tuberosities’ are apparently the bones that suffer 🙂  Who knew!!    …..  Any how I felt that El’s goal was a way bigger challenge than me just mucking about with a paintbrush, paints and papers and gel mediums and various glues for heavens sake!

There’s nothing like giving me some responsibility.  I suddenly become very competent and capable and ‘can-do!’  Nothing is a problem that cannot be overcome.  Prevaricate?  Me?  Good heavens no!  I’m Ms In-charge-and-on-to-it.  Here, let me show you how it’s done.  I’ll cheer you on and get on with my little project too – Let’s get there together, follow me!.  Ready?  Here we go – charge!!

Geez.  El works full time in a high stress career and writes two blogs.  She’s going to bike twenty miles.  I’m retired and have to finish a painting.  There’s a bit of pride involved here – if she cannot complete her challenge El has a very good reason why.  I do not.

Once committed I started work.  I had ideas, I saw shapes and colours – I knew who and what I was trying to represent in this fairy tale painting.  But it was slow.  I collaged a fairy.  I painted a face.  I made flowers out of the stamps.  I stuck everything down and painted over it all.  I worked and reworked.  It began to come together.  I left it for a couple of days and then came back and reworked some more.  I loaded colour on and took it off again.  I changed and altered and worked around and up and down…….

Paintings always go through an ugly stage – well mine do any way.  The trick is to keep working at it.  Nurse it through, make that one small sweep of colour that will lift it, right the wrong, pull it together.  I kept waiting for that to happen.

I thought and then I stopped thinking and finally – finally, I made this with my hands and my heart, for Alys 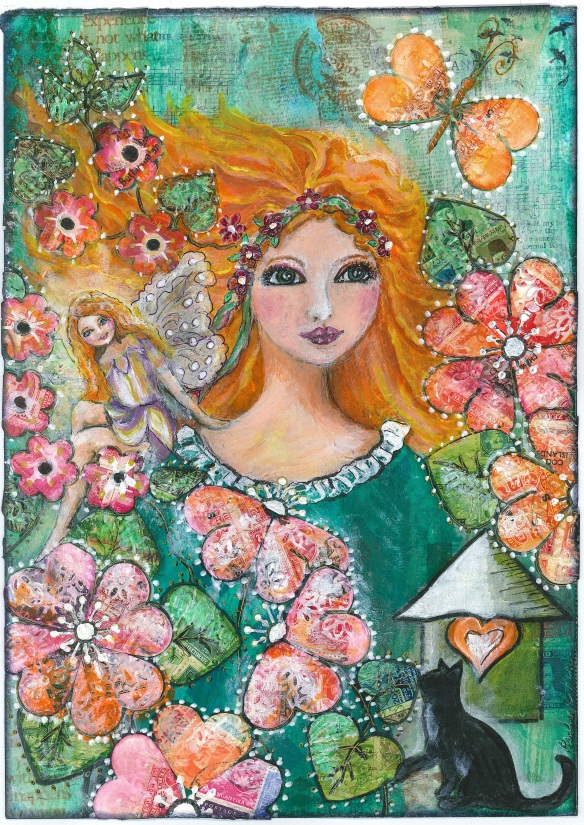 It’s an original mixed media work on 300gsm art paper, A4 size.  It is heavily textured and contains the stamps Alys sent me from her fathers collection as well as some of the paper they were mounted on.  It requires framing and is titled ‘The Wonderland of Alys’.

I hope you like it.  It is winging it’s way to California as you read this.

I also hope you my dear friends and readers and lovely new followers will wander over to visit with the most delightful El and M on their great blog and let’s see a big surge in goal-fest readiness for November!  I’ll be in, come join us.

108 thoughts on “A Painting for Alys”